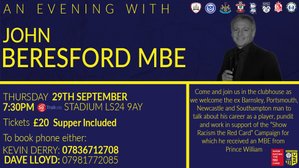 An Evening with John Beresford MBE 29th September - Time is Running Out!

We are delighted announce that John Beresford, the ex-Newcastle and Southampton star will be with us on the 29th September to talk about his career as a player and football pundit, as well as his work in support for the "Show Racism the Red Card" campaign for which he was awarded an MBE from Prince William

John was born in Sheffield in 1966. His career as a defender began with the Manchester City academy and then onto Barnsley and Portsmouth before signing for Newcastle United in 1992 where he made 179 appearances . He then moved back south to Southampton, had a loan spell with Birmingham City and finished his playing day with non-league Ossett Town, Alfreton Town and Halifax Town. He was capped twice at England B team level.

Our evening with John is the start of a series of “Evenings With” , a feature which like so many other highlights, stopped with the Covid Pandemic. Tickets are £20, which includes supper, and can be obtained by telephoning either Kevin Derry 07836 712708 or Dave Lloyd 07981 772085